For the past week and a half, the Ace of Swords has appeared in every single reading. Doing several readings each day, one would expect that cards would reappear in readings quite often. However, when a card starts appearing in all readings, both client and personal, I take special notice.

Back in June of this year, I wrote about the Page of Swords as a stalker card. I said:

Stalker cards appear when we are blocking something, consciously or unconsciously. They keep appearing until you deal with the issue, clear the blockage, or learn the lesson.

When stalker cards such as the Ace of Swords appear across a wide range of readings like this I take as a message to me, personally. While the card still has meaning within the client’s spread, I don’t give it as much weight as the other cards.

The Ace of Swords 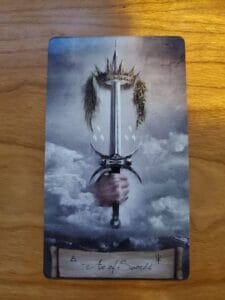 The Ace of Swords is all about the spark of an idea; something new that is just appearing, especially in the realm of thought or communication. This is a highly intellectual and rational card, one that is based in logic and reason.

Doing an in-depth reading wasn’t necessary for the Ace of Swords. I know what it means. It is telling me that I know what to do and now is the time for action. Clear away the clouds of uncertainty and gain some clarity. Use the sword of intellect to slice through any obstacles.

The Ace of Swords in Action

Although an encouraging card, telling me that I’m on the right track, it is also a difficult one. Goals just don’t happen, the work must be put in to achieve them. Last week was a difficult one with the 20th anniversary of 9/11 and the resurging COVID wave with the loss of some acquaintances from it.

On one hand, I’m being encouraged to move forward with my business plans, creating four new classes. On the other hand, the energy just isn’t there. Apparently, this is one of those times I just have to fight my way through to the other side, whatever that might look like.

While I wouldn’t say a stack of paper cards knows what is best for me, the intuitive knowledge that the images spark when I look at them comes from within me, my subconscious. Trusting that I know best is hard, but all anyone can do is try.

← Mindful and Present - a Guided Meditation