How to Read Tarot Reversals

Tarot reversals occur when the card is laid out upside down. How they are read depends solely upon the reader and there is no concrete right or wrong way. Here I’ll discuss the various ways that Tarot readers deal with reversals.

Many readers just ignore Tarot reversals, turning them right side up, and not changing the card meaning at all. As I stated above, this is a perfectly valid way to interpret the cards. 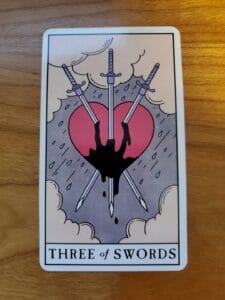 Another way of reading Tarot reversals takes the meaning of the card as something that is blocking the situation. For example, a reversed Three of Swords might indicate blocking of the grieving process or not accepting the end of a relationship.

Another interpretation might include suppressed emotions or emotions the client does not show to the outside world, although felt within.

Especially when the reversed card appears in a spread position dealing with blocks or obstacles, the Tarot reversal might be interpreted as adding more “oomph” to the card meaning. For example, the Three of Swords reversed in a relationship reading in the obstacle position might indicate really holding onto a loss or that the breakup will be especially heartbreaking.

The “classic” way to read Tarot reversals is to frame them as the opposite of what the upright card is. This is an oversimplification, but generally, if the card is positive, negative elements are brought forward. A good example is the Sun. In all aspects, the Sun is a very positive card, however the reversal can represent too much of a good thing. Too much Sun burns and can even destroy.

The Three of Cups is another example. Upright this is all about sociability, but in this method the reversal indicates the dark side of sociability: going along with the crowd, partying too much, and ignoring other parts of life.

Cards that are perceived as “negative”, The Tower, The Devil, etc are intensified in the scope and influence on the spread when they are reversed.

In my readings, I decide while shuffling if I am going to read the Tarot reversals and if I do, how I’m going to read them. I generally just note which cards are reversed and turn them upright. If the reversed card is in an obstacle or blockage position, I give a little more weight to it.

There are times when I just “know” that the reversed meaning is important. The type of meaning, be it mirror image, blockage, or internalizing, is extremely apparent when I look at the spread.

At other times, especially when the majority of the spread comes up reversed I will just note it and see if it feels like the Tarot reversals need to come into play. I don’t automatically see it as weighing the spread down, it might just be that the deck I’m using wasn’t adequately mixed.

As you can see, reading Tarot reversals is a mixture of intuition and technical skill. There are times when it is completely obvious that the reversals are irrelevant. On the other hand, there have been a few readings where the reversals indicated deeply internal issues for the client.

Ask your Tarot advisor how they read Tarot reversals. If you like, you can ask them to tell you which were reversed, even if the reader doesn’t use reversals. You may spot something that may take you deeper, making the reading far more personal to you.

Get More From Your Tarot Readings!

Four new classes designed specifically for Tarot clients are in the works! Sign up for the waitlist to receive first access and a 50% discount of any reading I offer!