Swords, Strife, and the Wheel of Fortune

I just finished writing my September newsletter which talks about strife. Apparently, the Tarot didn’t think I delved deep enough into that idea because the cards I drew for this post encourages me to explore the idea further. 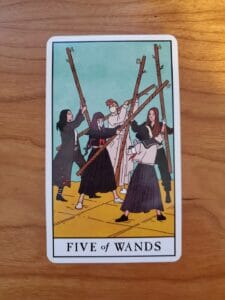 The card discussed in the newsletter is the Five of Wands which is a sad reflection on the state of our world today. We all seem to be at odds with each other over one thing or another. From COVID to politics, it seems like everything is dividing us. Even a simple trip to the grocery store is fraught. Someone was yelling at masked people walking from the store to their cars yesterday.

Looking at the Cards

The Ace of Swords represents my new thoughts about strife; it is telling me that this spread links back to what I was just working on. The Five of Swords is what I call the “Pyrrhic Victory” card.  A pyrrhic victory is one “that inflicts such a devastating toll on the victor that it is tantamount to defeat”. (src) Looking at the image, the main figure has prevailed over the others but has lost their friendship, respect, business, or any kind of relationship with them.

Finally, the Wheel of Fortune is one of my favorite cards. It reminds us that what goes up, must come down. It reflects both “rags to riches” and the fall of the mighty. One minute everything is going great and then everything crashes down.

The Cost of Strife

The whole concept of strife is of putting yourself against others or others against others.  Hesiod writes that there are two goddesses called Strife (or perhaps one with two faces):

So, after all, there was not one kind of Strife alone, but all over the earth there are two. As for the one, a man would praise her when he came to understand her; but the other is blameworthy: and they are wholly different in nature. For one fosters evil war and battle, being cruel: her no man loves; but perforce, through the will of the deathless gods, men pay harsh Strife her honour due. But the other is the elder daughter of dark Night (Nyx), and the son of Cronus [i.e.Zeus] who sits above and dwells in theaether, set her in the roots of the earth: and she is far kinder to men. She stirs up even the shiftless to toil; for a man grows eager to work when he considers his neighbour, a rich man who hastens to plough and plant and put his house in good order; and neighbour vies with his neighbour as he hurries after wealth. This Strife is wholesome for men. And potter is angry with potter, and craftsman with craftsman and beggar is jealous of beggar, and minstrel of minstrel. ~via Wikipedia

I would put it differently – there is Strife and then there is Striving. Strife divides, pits one against another in order to vanquish the others. Striving compares your own work and rewards against others, but does not work to bring the others down. Striving instead brings everyone up. Strife divides and we see it in work all around us, even in the simplest things like going to the store. Unfortunately, we can strive to be non-judgmental, can strive to be compassionate, but we still fall victim to the strife that others bring into our lives unless we actively choose to disengage. This may mean walking (or running) away.

One of the hardest things to accept is that we don’t need to be the punisher in a situation. We don’t need to point out other’s faults. This doesn’t mean not intervening when life or property is in imminent danger; it means letting other people make their own mistakes. Walk away. Disengage. The Wheel of Fortune reminds us to let time, the universe, the gods, whatever, do its work. Concentrate on your own failings, your own faults. Own your own consequences. Choosing to deal punishment to others does more harm to you than help to anyone else. This advice involves person-to-person interactions rather than society-wide change. Demonstrations against institutions and their unjust rules is one thing. Attacking a police officer is a whole different thing. You can fight against injustice, against intolerance, and against hatred without making it personal.